Skip to content
Member's Login
Procedures for Authorization of Ministry 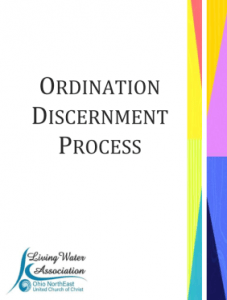 A Member in Discernment is a member of a local church of the United Church of Christ who has been called by God and who, under the care of the member’s Association, is preparing for the ordained Christian ministry. The purpose of this relationship is to provide support, counsel, and assistance to the student during the time of the student’s academic preparation for the ordained ministry.

If you are wondering how to discern a call to Authorized Ministry in the UCC, and what the process might look like, click the image to check out the Ordination Discernment Process Handbook.

Dual Standing and Privilege of Call

If Privilege of Call is granted, it will be for a period of one year and may be renewed. After accepting a call, the ordained minister applies for ordained ministerial standing in the United Church of Christ to the Association of which the Local Church extending the call is a part.

The license may be renewed. Voting membership in that Association may be granted.

A person seeking recognition and authorization as a Licensed Minister applies through his or her Local Church to the Association in which that church is a member.